More Than What You Bargained For…

Since becoming a Toastmaster I’ve heard hundreds, possibly thousands of speeches. I’ve personally learned about geocaching, the cool art of high tech treasure hunting. I’ve learned about Tae Kwon Do and what it takes to become a black belt. I’ve even learned how to make brownies over a campfire while camping.

There is so much to learn from other people. I decided to see what some of you have learned from speeches you have heard. I randomly picked 2 people from each of District 7’s 36 areas, and emailed them asking what the last speech they heard was and what they learned from it.

Here are some of the responses:
———————————————————————————————————————-
The last speech I heard in Toastmasters was from one of our oldest members, Ray Stout, where he reminisced about his trekking adventures through the forest of Oregon and description of images in brilliant graphic details, which remained etched in his mind even after 40 odd years.

The main aspect of his speech was the way he described scenes which helped us to picture the same with no effort at all. Additionally, it’s always a learning experience listening to people from various cultures, backgrounds and ethnicity.

Gloria Feider Polzin
Estacada Rivermasters Club
———————————————————————————————————————
We recently heard a speech in our club regarding NLP or neuro-linguistic programming. It was an interesting approach to calming your thought before any activity that is stressful. It can be employed in a large variety of situations including Toastmasters speeches. NLP, consciously or unconsciously, relies heavily upon (1) the notion of the unconscious mind as constantly influencing conscious thought and action; (2) metaphorical behavior and speech, especially building upon the methods used in Freud’s Interpretation of Dreams; and (3) hypnotherapy as developed by Milton Erickson.

Ted Stonecliffe
Clarke County Toastmasters
———————————————————————————————————————
Last speech I had heard was mine. It was an impromptu speech called “My Day at the Beach”. What I had learned from the speech is the immediate feedback from the audience. I find out what works…is my message getting thru to people do I see nods of acknowledgement, laughter from a funny. Staying focused on a speech about the beach so I have people’s attention. Not to have the audience attentions wander.

With so many things to learn in this world, I feel privileged to be among Toastmasters friends, learning about their lives and their experiences. If I’m lucky I might learn how to change a tire, how to become a millionaire in 3 easy steps, or how to add more than 24 hours to a day. For now, I’m thankful for another opportunity that Toastmasters has offered me…to get more than what I bargained for.

This year District 7 Toastmasters celebrates its 80th anniversary. The annual conference recognizes members are the heart of the district. As leaders they set the standard for those who follow, just as the standard was[...]
Jun
6
Sat
6:45 PM POSTPONED INDEFINITELY – Celebra... @ Warner Pacific College
POSTPONED INDEFINITELY – Celebra... @ Warner Pacific College
Jun 6 @ 6:45 PM – 9:00 PM 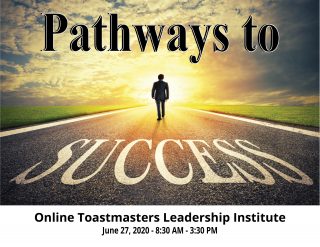